I draw inspiration from several places. I grew up in a typical Chinese-American household as the first American-born generation in my family. We owned a little family Chinese restaurant in Florida where everyone helped out wherever help was needed. These would be my formative years where I would learn basic cooking skills that would help me feel comfortable in a kitchen setting but I never showed much interest in it as a kid. My mom is a great cook specifically with traditional Chinese foods native to Hong Kong. Growing up I never understood why anyone would want to spend an entire Sunday planning dinner that night but now I find myself doing the same thing and understand completely.


Fast forward to college when I was off on my own and only did minimal, albeit interesting and sometimes inedible cooking w/ my college roommate, Carrie. Rachel Ray was just starting to get popular and that kicked off my obsession w/ Food Network. Even as a kid, I had always been a huge fan of Great Chefs back in the day but a channel completely dedicated to food ALL DAY? Thank you cable. 4x DVR fast forward to my post-college days when I met my husband, got married and now live in Bothell, WA.


Since resigning from a desk job in August of 2009, I've been home and have turned into a "Lady who Lunches". This famous (in my social circle at least) phrase was taken from an episode of the Barefoot Contessa where the host, Ina Garten, makes lunch for the original owner of the specialty food store Ina purchased in the late 70's. The now most famous Barefoot Contessa, Ina Garten, is the host of a very popular cooking show on Food Network of the same name and let me tell you folks, I canNOT get enough of this woman. 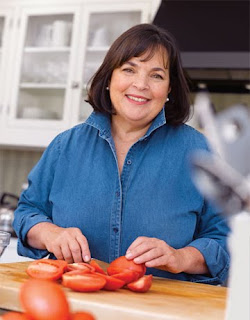 If you don't know of her, here is a synopsis (notice I didn't say brief) of why I am mildly obsessed w/ this woman:

First, her cooking style. Too often I find recipes to be way over my head or just out of a sane person's reach due to several reasons including but not limited to: exotic ingredients, convoluted 54-part steps and general lack appeal. Not an Auntie Ina (a coworker so lovingly named her) recipe. Hers are simple, made with simple ingredient and lack pretentiousness and yet still feel super elegant and special.

Second, she has this amazing house in East Hampton where she lives and has all these fabulous gay friends that she always has over for cards and other fabulous gatherings. Her husband, Jeffrey, is this adorable little curly haired man (which I've read is very successful businessman and currently a professor at an Ivy Leage school, la-di-da) that just adores her and everything she cooks for him. I often drop obvious hints to Gabe about how sweet Jeffrey is and how I wish once in a damn while he would compliment my cooking. His response? That he does compliment me by stuffing his face full of food so much so that he doesn't want to be rude and talk with his mouth full and there's my compliment. Riiiight.

Third, the snappy music on her show during cooking demonstrations. When Gabe hears the maracas, he knows Barefoot's on.
Posted by Amytacular at 7:40 PM No comments: Links to this post