In a wonderful alignment of the cosmos, today is not only Father's Day, it's the First Day of Summer AND what would've been my dad's 67th birthday.  His birthday always coincides with the first day of summer - a fitting day for a man who was a wonderful, kind and (mostly) fun-loving dad.  As most daddy's girls know, there exists this magical kryptonite to their dad's heart affording us the ability to melt away every ounce of resolve to properly parent and discipline an unruly daughter.  I, of course, had it and you know my brothers were completely jealous.  Kuen also wields this magical power over Gabe.

The man wasn't without his struggles but I'm so grateful that when I reflect on my childhood, I recall: laughter, McDonald's, Disney World and boating trips and mah-jong parties at our house where people would show up before dawn and stay late into the evening eating, drinking and having a good time.  My dad's motto was, "Don't worry, be happy."  Yes, the inspiration did come from the cheesy Bobby McFerrin number from the late 80's and there's even some cassette tape recording somewhere in a box of my dad and pre-pubescent brothers singing it on karaoke.  Oh, what'd I'd give to know where that tape ended up.


There isn't a day that goes by that I don't think of and miss him.  I can't believe it's already been over 8 years since his passing and yet, sometimes I feel like he's just out on one of his trucking trips.  It's like I can still pick up a phone and hear his voice in my head greeting me with his usual, "Hi dah-ling!"

I actually hope Kuen's rebellious stage comes before she leaves the house because it seems like when us late bloomers do it, we go full on BSC (bat-shit crazy).  I went through my awful rebellious stage in college (also, can we please just raise the legalization age for everything to 30?).  The regrettable tattoos and boyfriends are completely overshadowed by the fact that I just didn't give my parents the time of day.  Years of filial piety rhetoric that was drilled into my brain completely dissolved after leaving the nest.  Worst still, during my cousin's wedding I passed up on (what I didn't know at the time would be) my last opportunity to dance at a wedding w/ my dad.  GAH.  I know my dad would forgive me anything but it burdened me for a long time and now serves as a poignant reminder that my family is everything to me.  They may drive me crazy at times, but they're mine and I love them and I owe a debt of gratitude to each and every one of them.  The difficult lesson of the finality of death came with the loss of one of the most important people in my life.

I inherited my diabetic dad's infamous love of sweets.  One of his favorites was cinnamon buns from that popular mall chain.  My mom would always roll her eyes when we would split up from him at the mall only to find later at the food court rendezvous point my dad unapologetically holding a soda or coffee from the cinnamon bun place not even trying to hide the evidence.  They had the same supernatural power over him as I did and he would chant, "Cinnamon bun, cinnamon bun, cinnamon bun."  Dad was awesome.

Anywho - I didn't get around to actually making these this week but I plan on doing so soon.  When I do, you know I'll be thinking of my dear daddy and feeling forever grateful to him for being so awesome to my brothers and me.  Love you so much Daddy!

Minimalist Baker's Easy Cinnamon rolls (and they're vegan to boot!)

Happy Father's Day to all the dads out there.  Give your dad a big hug if you can (unless he's a complete jerk..and even then maybe still give him a hug).
Posted by Amytacular at 5:00 AM No comments: Links to this post

I had a draft sitting in my blog since January that I never finished.  Needless to say, taking a vacation in February was ill-advised since it's a super busy time of year for me at work.  I had something here noting how I hated January because my entire blog feed had 10,000 recipes for freaking green smoothies due to everyone being crazy from their New Year's resolutions.  It would've been a negative time to blog so consider it a blessing in disguise.

Lesson: Don't ask your doctor for book suggestions.  Since my last post, I read this very scary book and I'm too scared to eat meat.  This happened briefly right before  I got pregnant after watching a rather graphic episode of Oprah where she sent Lisa Ling to tour a Cargill meat processing facility (just, don't).  Anywho, I just can't seem to give up the Chick-fil-a, especially since they just opened a few in Washington for the first time since I've moved here.  It's causing quite a stir.  This doesn't mean the smell of hamburgers on the grill doesn't make my mouth salivate, it just means I'm going to consume less meat.  Plus, cows and pigs are just so darn cute.

I'm going crazy over these chickpea burgers.  It's like a giant falafel essentially, which, marry me.

A friend turned us on to these eggs and bacon (see?  We still eat meat) and it is AH-MAZING!  So glad this local, humane movement is catching on.

Have made this Peanut Butter Oatmeal Bar recipe several times within the last few weeks - super good and so easy.

This Avocado Hummus - c'mon, you don't have to be vegan to think that sounds delish.

Yet another reason to love Trader Joe's, I've recently discovered this Goddess Dressing that is suuuuuper yum.  Try it!

If I'm being totally honest, I just couldn't stop laughing when I read this article about J.Law and her hot bodyguard and just felt I had to share on my blog.  So thanks, J.Law for both having a hot bodyguard and inspiring me to get on my blog again.

(Again, leftover from January...)I was a tad too young for leg warmers back in the 80's but I'm making up for lost time - who else is excited they're back in style?!  I had a Treat Yo Self moment and found some from Target.

I'm new to the Cards Against Humanity world and we played it while in FL (waaaaay back in February).  MAN.  Make sure the kiddos are fast asleep before opening the box.  The raunch was palpable but we had a hilariously good time.

Just for Fun:
I got a nail art kit (don't laugh, it was on my Christmas wish list) and I'm L.O.V.I.N.G. it.  When do I find time to do this w/ a 3 year old, you ask?  Let's just say I won't know what to do w/ myself when nap time disappears.  I had a little impromptu nail session with Carrie when I went down to FL and I'm so annoyed I didn't get a photo of the finished product.  I feel like I should start a portfolio! 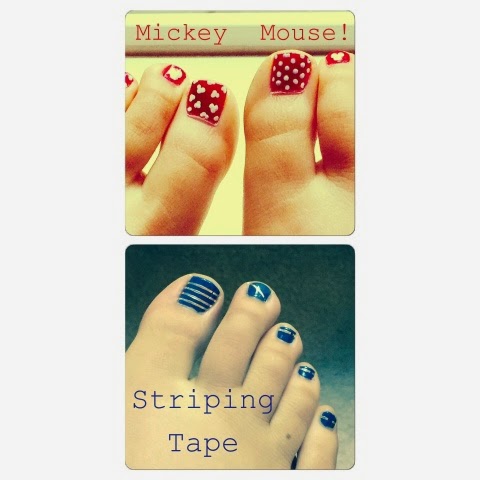 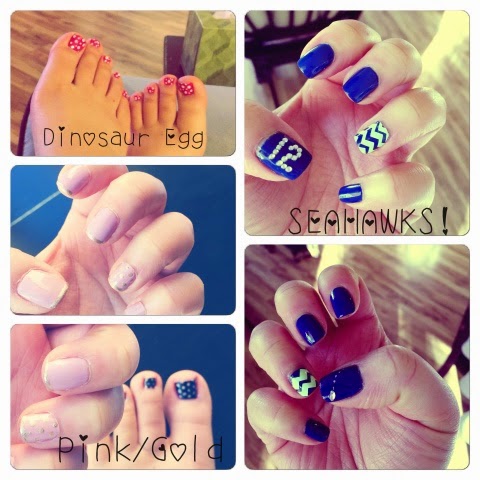 Posted by Amytacular at 6:00 PM No comments: Links to this post